4250% INCREASE in FETAL DEATH REPORTED after flu shot
​
The CDC deliberately misled the nation’s obstetricians and gynecology regarding the flu shot for pregnant women.

If you’re pregnant, beware of doctors using aggressive fear tactics pushing you to get vaccinated. Here’s why…On September 27, 2012, the Human and Environmental Toxicology Journal (HET) published a study by Dr. Gary Goldman reporting a 4,250 percent increase in the number of miscarriages and stillbirths reported to VAERS in the 2009/2010 flu season. That year the Centers for Disease Control (CDC) had recommended the double-dosing pregnant mothers with two flu shots spiked with mercury. In his abstract, Goldman said:“The aim of this study was to compare the number of inactivated-influenza vaccine–related spontaneous abortion and stillbirth (SB) reports in the Vaccine Adverse Event Reporting System (VAERS) database during three consecutive flu seasons beginning 2008/2009 and assess the relative fetal death reports associated with the two-vaccine 2009/2010 season.” [source:http://vactruth.com/2012/11/23/flu-shot-spikes-fetal-death/

This is what PREGNANT WOMEN need to know about the mercury in flu vaccines:

THE FLU SHOT IS NOT TESTED FOR SAFETY IN CHILDREN

Despite what your health practitioner will say as they attempt to convince you to get the flu vaccine, the shot has not been evaluated for cancer risks, safety in pregnant women, or safety in various age range categories for children.
Vaccine package insert warnings which read as follows:

FLU VACCINE IS NOT Mercury-Free 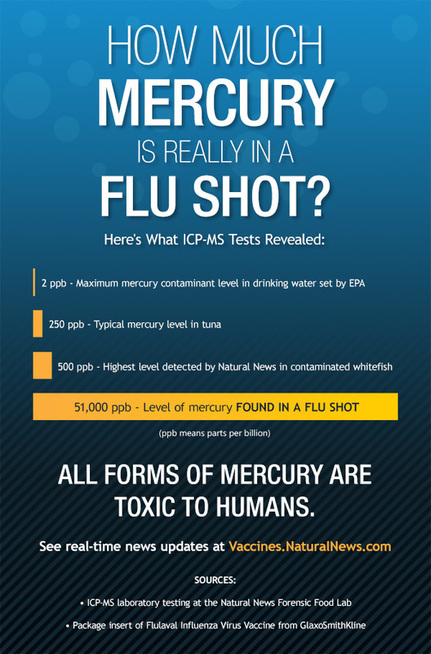 THIMEROSAL/MERCURY
The Influenza Vaccine clearly shows the vaccine contains Thimerosal a neurotoxin. Thimerosal, which is approximately 50% mercury by weight, has been one of the most widely used preservatives in vaccines.
Tests conducted via ICP-MS document mercury in the Flulaval vaccine at a shocking 51 parts per million.
50,000 ppb Mercury = Current "preservative" level mercury in multi-dose flu (94% of supply).
SOURCE: *Mercury in Vaccines

WHAT EFFECTIVE DOES MECURY HAVE ON YOUR BODY?​
0.5 parts per billion (ppb) mercury = Kills human neuroblastoma cells
​(Parran et al., Toxicol Sci 2005; 86: 132-140).
2 ppb mercury = U.S. EPA limit for drinking water http://www.epa.gov/safewater/contaminants/index.html#mcls
20 ppb mercury = Neurite membrane structure destroyed (Leong et al., Neuroreport 2001; 12: 733-37).
200 ppb mercury = level in liquid the EPA classifies as hazardous waste. http://www.epa.gov/epaoswer/hazwaste/mercury/regs.htm...
25,000 ppb mercury = Concentration of mercury in the Hepatitis B vaccine, administered at birth in the U.S., from 1990-2001.
50,000 ppb Mercury = Concentration of mercury in multi-dose DTaP and Haemophilus B vaccine vials, administered 4 times each in the 1990's to children at 2, 4, 6, 12 and 18 months of age.
Current "preservative" level mercury in multi-dose flu (94% of supply), meningococcal and tetanus (7 and older) vaccines.
By injecting mercury instead of ingesting it, you are essentially by-passing your inner filtration systems.  All of the mercury in a vaccine enters the blood stream, which leads straight to the brain.  Remember that toxic amounts of mercury is considered anything over 200 ppb, and the amount of mercury in a “thimerosal-free” flu vaccine is 300 to 600 ppb – the vaccine most commonly used contains 50,000 ppb.  When you ingest mercury, the amount that reaches your blood stream is much less than the actual amount you consumed.  When you vaccinate, the entire amount of mercury reaches your blood stream.

THE FLU SHOT NOT SAFE.
IT IS THE MOST DANGEROUS VACCINE.

As of April 2016, 126,884 adverse reactions/events were reported for the flu shot to the Vaccine Adverse Events Reporting System and it has the been the most compensated for vaccine injury. Vaccine manufacturer’s and providers administering vaccinations are exempt from lawsuit in the case of injury or death. Possible reactions include: Paralysis, severe allergic reaction,vomiting, chronic exhaustion, facial palsy, blood and lymphatic system disorders,convulsions and more.

DOJ Quarterly Vaccine Injury Compensation Information
Department of Justice numbers reported regarding quarterly vaccine injury information reveals that the flu shot remains the most dangerous vaccine based on injuries and death compensated by the U.S. Government.
The estimated 1,000 claims that the VICP anticipates being filed in 2016 are projected to cost $224 million. Although the VICP was originally created by Congress to shield drug companies producing government licensed, recommended and mandated vaccines for children, today it is not children but adults injured by influenza vaccine who are receiving most of the compensation.
The majority of compensated flu shot injury claims are for nerve inflammation diagnosed as Guillain-Barré syndrome (GBS), an autoimmune disorder that attacks the nervous system and can result in life-long paralysis. Other complications include fibromyalgia, transverse myelitis, chronic inflammatory demyelinating polyneuropathy, acute disseminated encephalomyelitis, and death.
- See more at: http://vaccineimpact.com/2016/flu-vaccine-injury-and-death-claims-increase-in-2016/#sthash.JxwOFdJZ.Wkd8XjMT.dpuf

Vaccine Injuries are Seldom Reported
The U.S. Government keeps a database of reports documenting vaccine injuries and deaths called The Vaccine Adverse Event Reporting System (VAERS). The problem is that very few medical officials ever report vaccine injuries or deaths, either because they are not trained to recognized them, or due to pressure within their profession to not report them. To admit that vaccines do cause harm is professional suicide for most doctors and medical professionals.
Hence, the quarterly DOJ report on vaccine cases only represents a tiny fraction of the actual cases that exist.
One place we can get a glimpse of the amount of vaccine harm that is being caused in the U.S. today is to look at emergency room visits. As one can see in the report above, with most of the settlements being cases of harm caused by the flu vaccine, Guillain-Barré Syndrome (GBS) is the most common injury suffered from the flu shot. GBS is a debilitating disease that attacks a person’s own immune system and damages their nerve cells, causing muscle weakness and sometimes paralysis. It is very similar to the symptoms one may see with polio.
If you are taken to the emergency room with signs of GBS during flu season, chances are one of the first questions the doctors will ask you is if you have received the flu shot recently. GBS is also listed as a side effect of the flu shot in the package insert.
- See more at: http://vaccineimpact.com/2016/government-continues-to-pay-damages-for-injuries-and-deaths-due-to-the-flu-vaccine-in-vaccine-court/#sthash.OOOM6ZRj.dpuf
Powered by